The lack of accuracy, transparency and accountability in the current Texas election process means it would be impossible to present sufficient evidence in a court of law to prove that anyone elected to public office was actually the intent of the majority of those who voted in their election.

The current Texas election process is a true “BLACK-BOX” operation. Why? Because there is no TRANSPARENCY, no ACCOUNTABILITY and the ACCURACY is unknowable. There are only three things we know for sure at the conclusion of a Texas election:

2. The voting period began and ended, and

3. Winners were declared by a governing body. 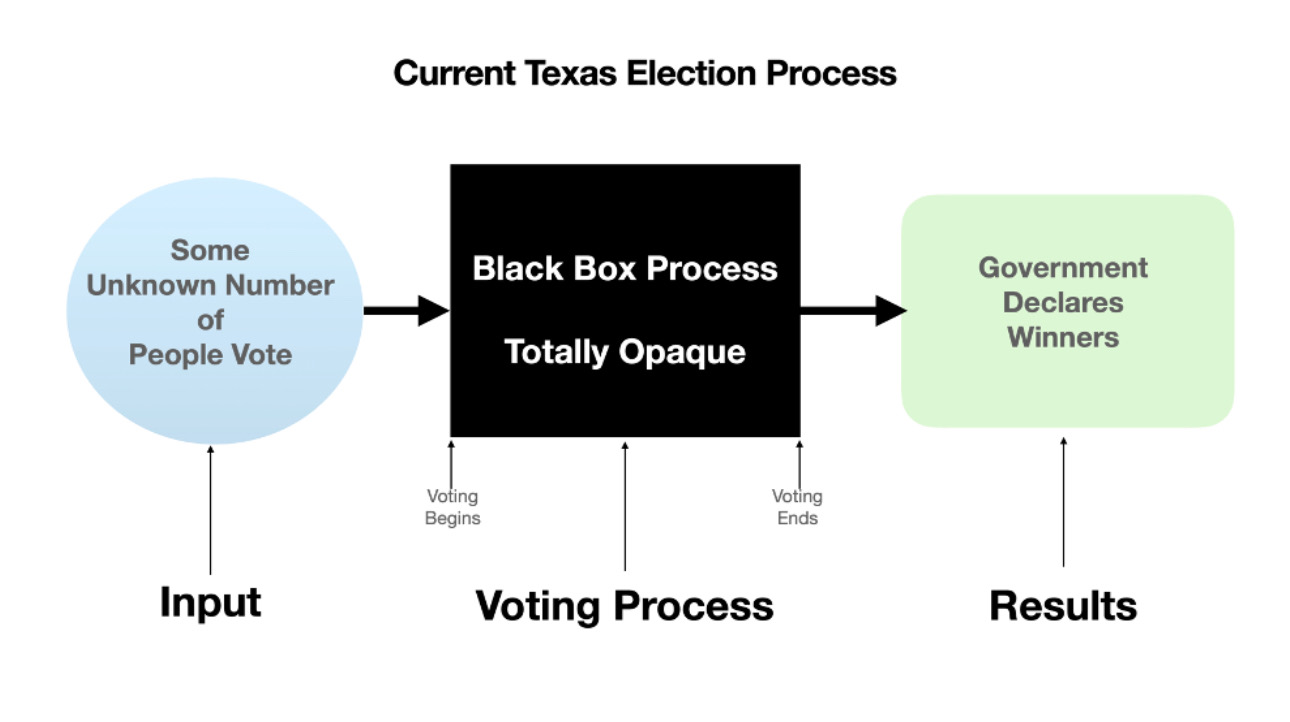 This must change, but anytime a new idea is put forward to change any aspect of our election system the first thing election people say is: Why change? The current systems works. This same statement is made by both those who do not understand the laws and by those who, for nefarious reasons, want to keep the flaws.

The answer “the current system works” can only be made because the government says it works; not because we know it works. In reality we know little to nothing about how the process works or its accuracy. All we really know is that it has a list of ballot items, a date and time to begin and a date and time to end. Everything else is assumed. This lack of known accuracy is because the election process is not transparent and there is no meaningful accountability. Neither the voters or the election workers are privy to what happens inside the “Black Box” election process and equipment.

“Is the winner, declared by the government consistent with the intent of the majority of the people who cast their vote in that particular race?” The best answer possible today is “maybe” but there is no way to know for sure.

It is not possible, under the current Texas election process, to answer, with any degree of confidence, this question. It was not originally intended to be this way. But, in fact, the current processes, computers, and software have significantly degraded the transparency, accuracy, and accountability of Texas elections.

The love affair with technology and the sacrifice of security for convenience have been the downfall of our election system. With good intentions, computers were viewed as the solution to the ballot box stuffing that often-accompanied hand-marked paper ballots. Unfortunately, that has not been the case. Computers and software have increased the opportunities and frequency of error and fraud in ways never considered and to a level much greater than and more difficult to detect than that of the original system of hand-marked paper ballots.

Today, the announced winner of an election is only the winner because the government, says they are the winner. The true winner is not only unknown; the true winner is unknowable with the current election system and electronic equipment. The three main reason for this tragic situation we are now in are:

Our elections are too important to not have a system that delivers a high degree of confidence that the will of the people is being respected. The current system does not do that. There are a number of reasons for this unfortunate, degraded condition of our election process.

One reason is that the SoS Elections Office could fix most of the problems that currently render our election process highly vulnerable to error and fraud. The SoS Elections Office has the authority and ability to issue rules that could significantly reduce the opportunities for error and fraud but, to date, continues to refuse to do so. In fact, the same office has a sordid history of issuing “waivers” that have increased the possibility of errors and opportunities for fraud.

Another reason is that the legislature has allowed processes, procedures and equipment to creep into the system wherein security has been sacrificed for convenience. Our current system that depends almost totally on computers and software, which we have no control over or knowledge thereof.

Some of these conveniences that degraded security and increased error opportunities are:

While no election process can guarantee 100% accuracy, 100% of the time, it is irresponsible for our legislature to continue to allow a system in which the ACCURACY is totally unknown, there is no meaningful ACCOUNTABILITY, and is totally opaque (not TRANSPARENT).

It is time for the legislature to stop allowing the elections equipment lobby, misguided bureaucrats enamored with technology and the propensity for convenience to perpetrate this “Black Box” election process that has sacrificed security for convenience. Texans deserve to have an election process that yields a high degree of confidence that the people elected to office are the will of the people as expressed any their vote. This is not possible with the current election process, procedures, computers and software used in Texas elections.

This is unacceptable and has to change so that future generations of Texans can enjoy the blessings of liberty that our Founding Fathers and previous generations gave to us with the sacrifice of their life, liberty and sacred honor. LET IT NOT BE IN VAIN.

It is time for the Texas Legislature do whatever it takes to make Texas elections ACCURATE, TRANSPARENT and ACCOUNTABLE.