Misinformation has led good people to make fun of the Legislature’s attempt to keep men out of women’s restrooms, locker rooms, and showers. “Bathroom” jokes now abound. Unfortunately, this issue is not funny and it will have some very serious consequences for women and children if this legislation is not passed. 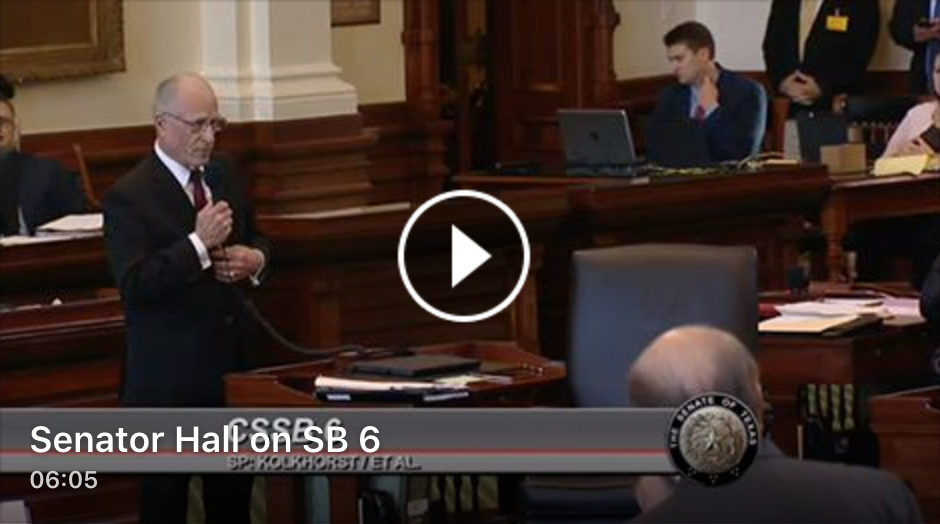 There is truly an evil force hard at work in Texas.  The objective of this evil force is to completely destroy the moral foundation of Texas and our Nation. This evil force is deeply embedded in a militant faction of the LBGTQ community.  While the LGBTQ community makes up less than 2% of the total population, this militant smaller faction accounts for less than 1% of the 2%, and yet this very small group is determined to destroy the foundation of society by robbing the vast majority of women and children of their right to privacy and safety in the most intimate environments; locker rooms, showers, and restrooms.

How controversial could that be? You would be surprised.

Recently, the Texas Senate State Affairs Committee heard testimony on Senate Bill 6 (SB 6), the ‘Texas Privacy Act’, of which I am a co-author. In the words of the primary author of the bill, Senator Lois Kohlkorst, “The act designates separate showers, locker rooms, and restrooms for males and females in public schools, colleges, universities, and government facilities.”  It also further protects the privacy and safety of women and children by prohibiting local governments from establishing anti-discrimination ordinances by establishing a new class of protected people.

SB 6 would simply make changes in state law designed to protect privacy and safety in bathrooms, changing rooms, and locker rooms. The bill would prohibit a municipality from adopting an ordinance or an ISD issuing a rule that establishes a policy relating to who may use a private entity’s bathroom or changing facility. SB 6 prohibits any political subdivision from considering an entity’s bathroom policy when awarding a contract, and requires each school district, public university, state agency, county, municipality, special district, and open-enrollment charter school to adopt a bathroom designation policy based on a person’s biological sex.

If SB 6 does not pass, local governments and schools will have the ability to pass non-discrimination ordnances and policies for a new class of people, and would be capable of creating penalty-free zones that could enable some very bad sexual and indecent behavior.  That is, straight-male perverts would then have locations in which lewdness, indecent exposure, voyeurism, etc., would no longer be a crime.  These acts of perversion will come not from transgenders, but from straight males.

What SB 6 does do is ensure reasonable accommodations, much like the American Disability Act (ADA) does, for all people. This bill is now necessary because the LGBTQ community is no longer content with the policies and accommodations that have worked with little to no controversy in the past.  They are now pushing an agenda to allow transgender people to use the restroom and locker room and shower of their choice.  Unfortunately, since ‘transgender’ is a state of mind and not a physical description, this policy would allow any male in the girls locker room and showers. Parents who object to their young daughters showering in a locker room with an anatomical male are attacked or ridiculed for their politically incorrect position.

Also, the opposition to SB 6 by The Texas Association of Businesses (TAB) and Chambers of Commerce based on projected economic impact is totally unfounded. The report on which TAB bases its opposition was done by some college students long before North Carolina passed its bill to protect women and children in the restroom, locker rooms, and showers. That report has now been totally debunked by multiple organizations. The withdrawal of Specialty Events and threats of businesses leaving North Carolina have had almost no impact on North Carolina’s economy. In fact, in 2016, North Carolina had one of the strongest economic and jobs growth in the Nation.

On the other hand, when Target Department Stores made public its plan to allow men to use the women’s restroom in all stores sales immediately dropped and Target stock fell almost 50%. Based on facts, not passing SB 6 would be bad for the Texas economy.

Another fact is that, in every community, where a rogue ISD has implemented a policy that caters to the transgender community by allowing boys to use the girls restrooms, locker rooms, and showers, the community relationships have been destroyed. It is expected that if these policies were allowed to continue there would be massive exits from the public school system. This would not be good for Texas children or the schools.

SB 6 does not prohibit a private business from establishing any internal policy it so chooses. A company can decide what is best for its employees and the customers they serve. Thus the free market in the private sector will detain the acceptance and success of this policy.

As legislators, it is our responsibility to protect our citizens – all of them. No child should be put in a position where they feel their modesty or safety is threatened. That does not mean that individuals who are transgender should be subject to bullying, ridicule, or marginalization. It does mean that young girls and boys should not be embarrassed or ridiculed because they do not want to be in a state of undress with a transgender student of the opposite biological sex. Modesty and self-image are important for every person.