Senate Bill 1356, A Real Solution to “Texting While Driving”

The Texas House has passed and the Senate has considered in committee legislation that would create a misdemeanor offense of using a hand held device to read, write, or send a text based communication while operating a moving vehicle that is not stopped. Regrettably, the proposed solution will actually increase vehicle accidents.

Distracted driving that results in a vehicle accident (18 percent of all accidents) is a serious problem that needs a serious solution. But research does not support the banning of hand-held electronic devices to solve this issue. The Insurance Institute of Highway Safety (a premier organization on the issue) has multiple studies that show no decrease in accidents when cell phone bans were implemented. In fact, in many instances, accidents actually increased after the ban. Also, the data shows that prohibiting the use of cell phones has done little to stop the use of cell phones while driving. Banning is not the answer.

Senate Bill 1356 would provide that any person causing a collision from the operation of a moving motor vehicle commits an offense if the person is engaged in an activity that is not related to the operation of the motor vehicle, and interferes with the driver’s ability to pay attention to the road. An offense would be a Class C misdemeanor for minimal damage, or a state jail felony if the collision results in serious bodily injury or death.

The bill would prohibit local authorities from regulating or prohibiting distracted driving, ending the patchwork of regulation we currently have in place. Existing statutes prohibiting the cell phone use by minor drivers and cell phone use in school zones would not be affected.

If we want to improve vehicle safety and reduce the problem of distracted driving, we must address the whole distracted driving issue, not just a fraction of it. An accident caused by a distraction other than cell phone use is no less serious than the one caused by an individual on their cell phone. And, if the statistics are correct, it is much more likely to occur.

That is why I have filed Senate Bill 1356 which would address the reduction of distracted driving accidents by focusing on the punishment of the consequences, rather than the banning of any specific activity. Driving is a serious responsibility and failure to recognize that should be treated seriously.

If you have input on this item, please provide them to my Legislative Director, Kathi Seay.  She can be reached by email at [email protected] or by phone at 512.463.0102.

If you are interested in reading other pending bills and sending any comments to our office, they may be found at http://www.legis.texas.gov/.

As always, I appreciate the opportunity to represent you in the Texas Senate. 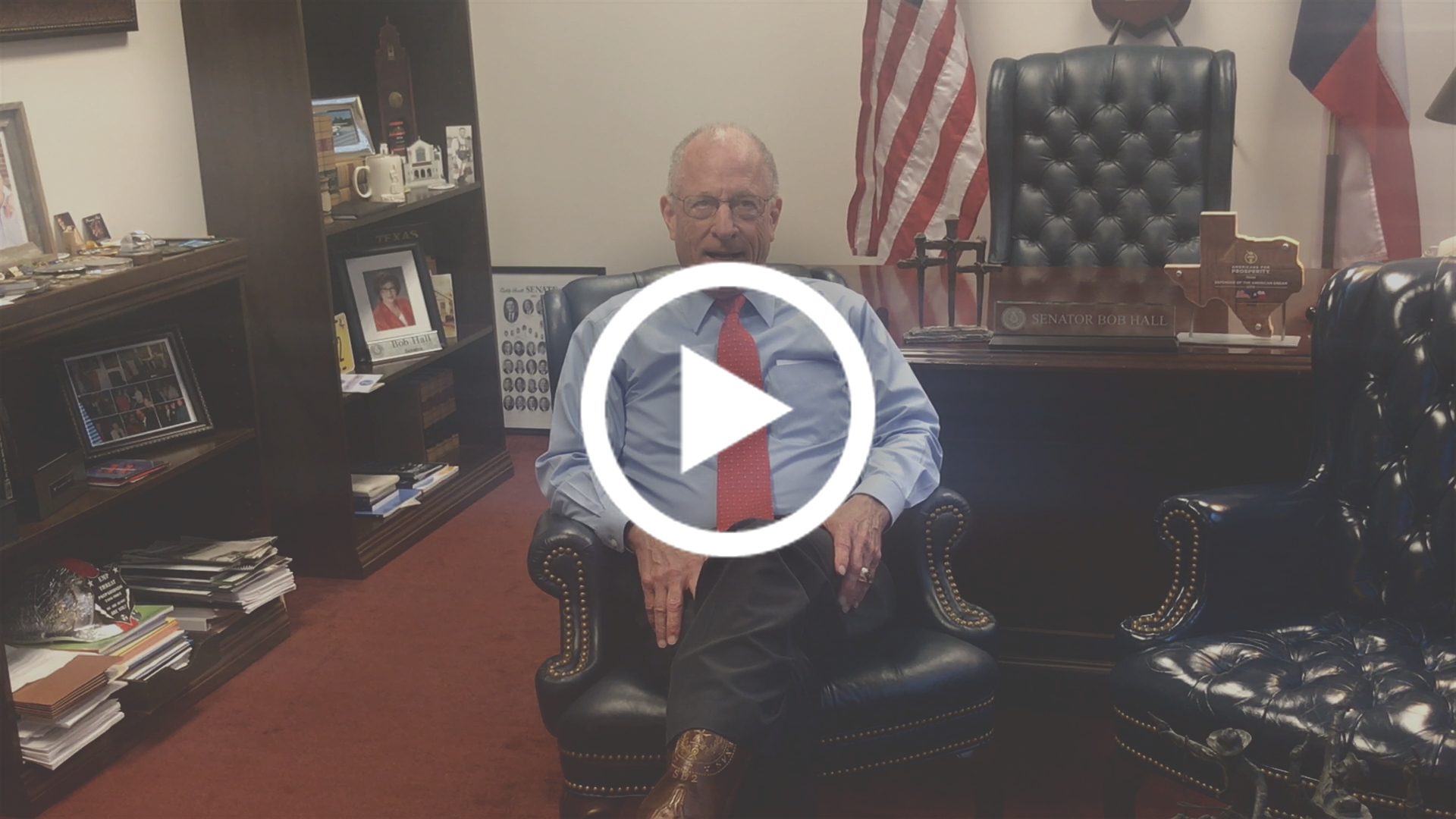 SB 84 – Revenue Enhancements
Texas spends more than $8 billion annually building streets and highways.  Texas roadway spending, however, has significantly trailed population growth, vehicle miles growth, and the growth in licensed drivers.  Texas has become the nation’s second most populated state and added nearly as many new residents over the past decade as California, which is much larger.  Traffic has grown substantially due to this increase.
To address the current shortfall of financial resources for the transportation needs of Texas and to satisfy Texas’ surface transportation requirements, interested parties advocate testing a new financing mechanism which incrementally increases state sales tax.

This bill would allow a pilot project test of such tax increment reinvestment zones, specifically targeting TxDOT highway projects. The primary beneficiaries of the project, would also be the primary ones shouldering the cost of the project.  The zones created by this legislation would extend one mile on either side of the centerline of a new highway project under a design-build contract.  The Comptroller’s office would estimate the projected annual increase in state sales tax revenue in the newly created zones, and transfer money at the end of each calendar year over the amount of sales tax in the zone during the year in which the zone was established.

SB 87 – Red Light Cameras – Vehicle Registration
According to a March 2015 article in Governing Magazine, cities have slowed or stopped installation of red light cameras. Outrage over the devices is no longer limited to angry motorists facing hefty fines. Judges have now tossed tens of thousands of tickets. Newspapers and government inspectors have exposed deep flaws in many cities’ equipment and enforcement methods. And the former CEO of one of the two major camera red light manufacturers was indicted on bribery and other charges related to Chicago’s cameras.

SB 87 would prevent a county tax assessor-collector or the Texas Department of Motor Vehicles from refusing to register a motor vehicle alleged to have been involved in a red light camera violation solely because the owner of the motor vehicle is delinquent in the payment of the civil penalty imposed for the offense.

SB 88 – Red Light Cameras – Repeal
This bill would prohibit counties, municipalities, school districts, and state agencies from using or operating photographic traffic signal enforcement systems, and would prohibit any such entity from issuing a civil or criminal charge based on evidence from such a system.

SB 90 – Driver Responsibility Program
The Texas Driver Responsibility Program has failed on every measurable front.  It has generated less than half of the revenues anticipated, failed to change driver behavior according to traffic incident statistics, and has dramatically increased the number of unlicensed and uninsured drivers on the road.  In addition, a significant portion of the revenue collected from the program is not being allocated to uncompensated trauma care costs as originally intended by the legislature.

Over 1.2 million people have had their licenses suspended for failure to pay surcharge assessments. People become caught in a cycle of poverty and debt from which they cannot escape.

This bill would prevent a person from having their driver’s license suspended for mere failure to pay a surcharge assessed by the DRP, effectively eliminating the enforcement mechanism.

While automatic license plate readers can serve a legitimate law enforcement purpose when associated with a criminal investigation, the ability for potential for police departments to create permanent records and virtual route tracking of innocent civilians, radically transforms the consequences of leaving home to pursue private life, and opens up opportunities for abuse. Such tracking of people’s location constitutes a significant invasion of privacy, which can reveal many things about their lives, such as what friends, doctors, protests, political events, or churches a person may visit.

This bill would mandate that the information retrieved by an automatic license plate reader must be destroyed within a period of seven days; unless this information is evidence in a criminal investigation or prosecution.

SB 96 – RMA Meeting Transparency
This bill would require an RMA to post information on its website regarding the time and place of public meetings, to broadcast meetings over the internet, and to archive those broadcasts within 2 hours of meeting adjournment.